I felt sorry for the girl sitting to my left. Sure, she had scored a stellar venue for a first date: Fourth row from the field at a St. Louis Cardinals playoff game. But she couldn’t possibly have known when she accepted the invitation that for three hours of her life, she’d be in the company of the most obnoxious guy on the planet.

“So what do you do?” I heard him ask as he leaned in an inch from her face. She answered, he said something else and then after a loud guffaw, he slapped her on her knee and took a big swig of his beer. Thankfully the crowd would get loud and drown out his annoying voice so I could pay attention to the game, but it was impossible to avoid seeing the knee slaps out of the corner of my eye. When he finished his beer, he reached over and started on hers. I couldn’t help but turn to my right, pat my date on the arm, and thank God I never had to go through that. 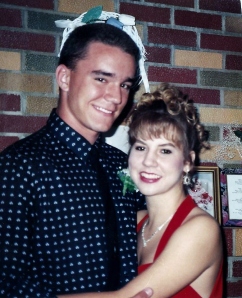 We’ve been together for more than half our lives. I asked him to my junior prom, but even in the eighth grade, I thought he was “hot”. After prom we dated the rest of the way through high school and college, then got married at 23. Thirteen years later, we’re like a vinyl sticker family you’d see on the back of a minivan, with two boys, a girl and a dog.

Through the years when new friends have discovered how long we’ve been together, the same question has always came up. “But if you were so young, how could you know he was the one? What if there was someone else out there?”

We did briefly date other people before we got together, and like many high school sweethearts, we had our breakups. He’d dump me to take out a girl at work, and I’d get mad and go to parties and dance clubs in search of something better. But feeling a sweaty guy grinding behind me never really did it for me. Neither did snuggling up with the college jock who had his own name tattooed on his bicep. After our brief stints apart, we’d always end up back on each other’s doorstep.

He was respectful to me, and polite to my parents – evident in the fact that my dad actually spoke to him after we’d dated for a few weeks, when he hadn’t said a word to a few other guys I’d seen for months. He also became like a brother to my brothers, and his family became mine.

Together as kids, we experienced pain in the deaths of his brother and both of my grandmothers, and in the tragic losses of classmates who got behind the wheel after partying. We also discovered the miracle of birth as each other’s nieces and nephews arrived in the world, and shared little conversations about what we would name our kids if we ever had them.

We encouraged each other through college, and after we each graduated, celebrated together when we received offers for our first real jobs. We have an irreplaceable history.

Don’t get me wrong. We aren’t a perfect fairy tale couple. In fact, sometimes I think because we’ve known each other for so long, we bicker like brother and sister. He annoys me when he leaves his bowl of peanuts on the end table every other night and wipes toothpaste on his bath towel. I bug him when I nag him to work on twelve home projects at once. Sometimes, when I hear about my still-single friends having a fun date or becoming engaged, I envy the newness — the excitement of finding things in common. The not fighting about money.

The butterflies when he walks into the room.

But the truth is that eventually, in every relationship, all of that newness goes away and reality sets in. My mom said something about this in her speech on our wedding day that I’ll never forget. 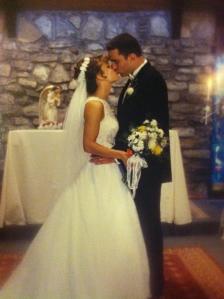 “Right now, the two of you are very in love and crazy about each other, but I want you to know that sometime down the road, you may not feel like that love is there. But if you wait, and push through it, I promise you it will come back. Every time.”

At the time I thought it was a strange thing to say to a couple beginning our life together. Why bring up a downer when everything is great? But man, if I’d known that day how hard marriage can be, I would have ran over to her and wrapped my arms around her neck and said “Thank you!” a million times.

All we had known up to that point was fun. Driving on back roads listening to music with friends. Hanging out in his parents’ basement making out and watching movies. Going out to happy hours and dinner — spending our money on whatever we wanted.

Then this thing called responsibility showed its ugly face, and life as we knew it started changing. There was a house payment to make and student loans to pay back. Going out wasn’t so easy any more. We had to stick to a budget, and would start to blame each other if money was tight from one month to the next.

And there’s nothing that brings along the shock of reality faster than when your first baby comes home. As much as we were thrilled to be having the child we’d talked about for so many years, we had no idea what the hell we were doing when it came time to take care of him. He’d try to hold our son a certain way to stop the crying, and I’d yell at him because it wasn’t right – even though I didn’t even know what was right. I’d call my mom for advice and she’d come down to help, but eventually I figured out that she couldn’t be there all the time, and we’d have to learn how to handle it together. And we did.

And we did again two more times after that.

Our lives today are 100% different than they were at 16. Now we’re toting the boys to sports and keeping their little sister busy in the stands with slushies and ring pops. We’re syncing our calendars to see who’s taking which one where, or playing family board games at home when we have a rare free night. Once every few months we’re able to make it out to dinner or a movie together, which is fine. Because even though we miss our young, free years, we both know that there’s nothing else we’d rather be doing right now.

There are days when I wish we could feel those first sparks again. I miss trying to guess where he’s taking me when he picks me up. I miss my heart thumping in the movie theatre, wondering if he’ll reach over and take my hand. All those things that first dates make you feel.

But there’s a wonderful thing about being able to stay home on a Saturday night and not wonder what else we could be doing. Being able to sit comfortably together in silence. Being able to wake up without makeup and knowing that he loves me, wrinkles and all.

And knowing that he would do anything for our kids is enough to make my heart swell to 25 times the size it did when we were 16. He rushes from work or class to make it to the boys’ games. The second he walks in the door at night, he helps them figure out how to download the newest app. He teaches them to dribble basketballs in the basement when it’s too cold outside, and plays catch in the backyard when it’s warm. He’ll be one of their best friends forever.

And I see him with this little girl — Swinging her up and down until she cackles. Making Little People talk. Sitting next to her as they concentrate on putting a Tinker Bell puzzle together – and my heart does a little dance. My stomach feels a flutter.

And I’m sure that all I’ve ever known is more than enough.