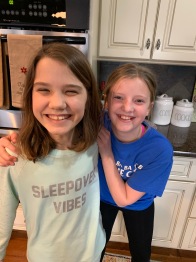 Last week when my daughter asked if she could get Snapchat on her phone (which isn’t really a phone because it has no cell service), I immediately said no. At only 9 years old, she’s not looking to send naked pictures to anyone or look at vulgar videos, so those weren’t my concerns. But she loves to use the photo filters on my phone that allow her to have dog ears, or wear funky glasses, or put hearts around her head. It’s all super cute, but I’m scared to death that she’ll make a habit of using filters to change the way she looks forever.

I see so many girls, young and old, who use photo apps to make themselves look “perfect”. Whether it’s Snapchat, Instagram or Facebook, people are painting themselves to appear flawless instead of just living in the moment. I don’t want that for my daughter.

I don’t want her to see freckles where the summer sun kissed her face — and make them disappear.

I don’t want her to erase all the acne that’s normal for her age when she’s a teenager — because no one else on social media seems to have it.

I don’t want her to make duck lips in every photo.

I want her to snap memories.

I want her to capture the big giggles that explode when someone tells a funny story.

I want her to soak in the the moments that matter instead of worrying about who else will see them.

In the years when I grew up, I couldn’t even see the photos I took until I got them developed, and while some of them turned out with heads cut off or eyes closed, many of them are the ones I still appreciate most. I’ve captured so many great times to remember every season in my life, and I didn’t need a filter for any of it.

Years from now, I hope my daughter will pull up her pictures and reminisce about the girls who were there with her at sleepovers and softball games. I hope she’ll see high school friends who walked in heels along with her for the first time. I hope she cackles at memories made in karaoke bars (okay yes, I hope I’m there to take those pics). I hope she has lots and lots of memories of all the moms who helped run her kids around –the ones who ended up being some of the best people she’s ever known. I hope she still loves to take pics of me and her together when she’s my age.

And finally, I hope she realizes one day that the crow’s feet around her eyes and the creases around her mouth don’t need to be hidden with a filter — because every single one of those laugh lines was totally worth it.

Turn your sound up ladies. This one’s for you!!

3 thoughts on “No Filter Needed”